Summer is in full swing and for many SLPs that means a welcome break from work. However, for me, it’s business as usual, since my program is year around, and we have just started our extended school year program.

Of course, even my program is a bit light on activities during the summer. There are lots of field trips, creative and imaginative play, as well as less focus on academics as compared to during the school year. However, I’m also highly cognizant of summer learning loss, which is the phenomena characterized by the loss of academic skills and knowledge over the course of summer holidays.

According to Cooper et al, 1996, while generally, typical students lose about one month of learning, there is actually a significant degree of variability of loss based on SES. According to Cooper’s study, low-income students lose approximately two months of achievement. Furthermore, ethnic minorities, twice-exceptional students (2xE), as well as students with language disorders tend to be disproportionately affected (Graham et al, 2011;  Kim & Guryan, 2010; Kim, 2004). Finally, it is important to note that according to research, summer loss is particularly prominent in the area of literacy (Graham et al, 2011).

So this summer I have been busy screening the phonological awareness abilities (PA) of an influx of new students (our program enrolls quite a few students during the ESY), as well as rescreening PA abilities of students already on my caseload, who have been receiving services in this area for the past few months.

Why do I intensively focus on phonological awareness (PA)? Because PA is a precursor to emergent reading. It helps children to manipulate sounds in words (see Age of Aquisition of PA Skills). Children need to attain PA mastery (along with a host of a few literacy-related skills) in order to become good readers.

When children exhibit poor PA skills for their age it is a red flag for reading disabilities. Thus it is very important to assess the child’s PA abilities in order to determine their proficiency in this area.

While there are a number of comprehensive tests available in this area, for the purposes of my screening I prefer to use the ProPA app by Smarty Ears.

The Profile of Phonological Awareness (Pro-PA) is an informal phonological awareness screening. According to the developers on average it takes approximately 10 to 20 minutes to administer based on the child’s age and skill levels. In my particular setting (outpatient school based in a psychiatric hospital) it takes approximately 30 minutes to administer to students on the individual basis. It is by no means a comprehensive tool such as the CTOPP-2 or the PAT-2, as there are not enough trials, complexity or PA categories to qualify for a full-blown informal assessment. However, it is a highly useful measure for a quick determination of the students’ strengths and weaknesses with respect to their phonological awareness abilities. Given its current retail price of $29.99 on iTunes, it is a relatively affordable phonological awareness screening option, as the app allows its users to store data, and generates a two-page report at the completion of the screening.

After the completion of the screening, the app generates a two-page report which describes the students’ abilities as:

The above is perfect for quickly tracking progress or for generating phonological awareness goals to target the students’ phonological awareness weaknesses. While the report can certainly be provided as an attachment to parents and teachers, I usually tend to summarize its findings in my own reports for the purpose of brevity. Below is one example of what that looks like:

On the Pro-PA, “Justine” evidenced strengths (80-100% accuracy) in the areas of rhyme identification, initial and final sound isolation in words, syllable segmentation, as well as substitution of sounds in initial position in words.

She also evidenced emerging abilities (~60-66% accuracy) in the areas of syllable and sound blending in words, as well as sound segmentation in CVC words,

However, Pro-PA assessment also revealed weaknesses (inability to perform) in the areas of: rhyme production, isolation of medial sounds in words, segmentation of words, segmentation of sounds in words with consonant blends,deletion of first sounds,  consonant clusters, as well as substitution of sounds in final position in words. Continuation of therapeutic intervention is recommended in order to improve “Justine’s” abilities in these phonological awareness areas.

Those of you who follow my blog know that I absolutely adore the “Between the Lines” app series by Hamaguchi apps, which focuses on targeting aspects of social language including tone of voice and non-verbal body language, perspective taking as well as idiom interpretation. I have already reviewed Levels 2 as well as Advanced, HERE and HERE, previously on my blog, so today I will be reviewing level 1, which is the simplest version in the the series geared towards “social beginners” . END_OF_DOCUMENT_TOKEN_TO_BE_REPLACED

In February 2013 I did a review of the Sunny Articulation Test by Smarty Apps. At that time I really liked the test but felt that a few enhancements could really make it standout from other available articulation tests and test apps on the market. Recently, the developer, Barbara Fernandes, contacted me again and asked me to take a second look at the new and improved Sunny Articulation and Phonology Kit (SAPT-K), which is what I am doing today. END_OF_DOCUMENT_TOKEN_TO_BE_REPLACED 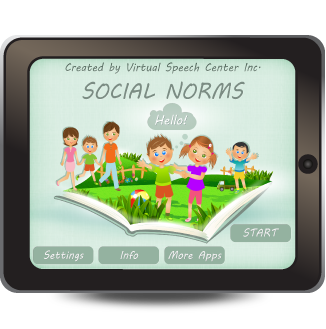 Today I am reviewing “Social Norms” a brand new app developed by the Virtual Speech Center to improve social skills in children with autism spectrum disorders. This app can be used by parents, educators, and SLPs. The users can customize it to add their photos, text, and audio to create individualized stories that teach specific skills to children with ASD with significantly impaired language abilities. It includes 53 stories on the following topics: END_OF_DOCUMENT_TOKEN_TO_BE_REPLACED

I enjoyed reviewing  Between the Lines Advanced so much that today I am bringing you an intermediate version of this awesome social-pragmatic language app called: Between the Lines Level 2, which also focuses on targeting: Interpretation of vocal tone, Recognition of facial expressions, Interpretation of body language as well as Recognition of idiomatic expressions and slang, just on a less advanced level and in a less challenging format.  The app uses photos and mini videos of people in a variety of real-life dynamic social situations to teach social skills. END_OF_DOCUMENT_TOKEN_TO_BE_REPLACED

Today I am reviewing an awesome social-pragmatic language app by Hamaguchi Apps called: Between the Lines Advanced, which focuses on targeting the following skills:

Today I am a reviewing a new vocabulary app created by the Virtual Speech Center called Real Vocabulary Pro.  Developed to target the core curriculum vocabulary of K-5th grade students, it has tons tons of pictures and pre-recorded audio to target various vocabulary concepts as well as allows users to add their own words, pictures and audio recordings for a more individualized and targeted therapy sessions. END_OF_DOCUMENT_TOKEN_TO_BE_REPLACED

Today I am reviewing Let’s Be Social is a new app from Everyday Speech, which targets basic social pragmatic language skills through 25 interactive lessons on the topics of recognizing emotions, solving problems, friendships, as well as making predictions. END_OF_DOCUMENT_TOKEN_TO_BE_REPLACED

Much like all their other apps, this one is super easy to use and very intuitive to navigate. With a variety of options to boot. Applicable to children of all ages beginning with 2+ years, it’s phoneme targets include 20 pictures per phoneme and per word position as well as phrases and sentences.  All phonemes are editable which is a very convenient options for therapists who need to customize their client’s phoneme lists based on the child’s present level of ability and needs. END_OF_DOCUMENT_TOKEN_TO_BE_REPLACED

Today I am reviewing a fun new app by Speak Easy Apps: Feed Maxi. Developed by a speech language pathologist, Pamela Mandell,  the app’s purpose is to introduce the child to food labeling and identification.

The goal is to feed Maxi the monkey a balanced diet of 80 food items which include: fruits, vegetables, proteins, dairy, grains and snacks. But Maxi doesn’t just request his food, he also comments, makes choices, rejects, as well as asks for more using sign language (ASL animations).

Feed Maxi is a fun and functional app which via a seemingly simple yet engaging set-up (monkey feeding) fosters a number of important skills in emergent communicators. You can find this app in the iTunes store for 4.99, or thanks to Pamela’s generosity you can win your own copy by entering my Rafflecopter giveaway below.
a Rafflecopter giveaway