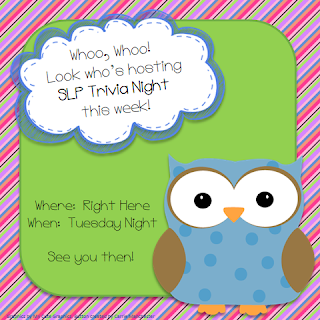 Thank you all who participated in yesterday’s Trivia Night!

Below you’ll find answers to round’s questions as well as the names of winners for each round.

2. What is the critical period hypothesis? It is a time period during which language acquisition takes place

3. Name at least 3 functions of communicative behavior during infancy

5.  What is jargon and up until what age is it appropriate in children?  Jargon is not true speech but rather pre-linguistic “nonsensical” vocalizations which involve adult-like stress and intonation patterns.  Jargon usually begins to occur around 10-11 months of age in children and can typically last up until about 18 months of age give or take depending on the individual development rate of the child in question.

1. As related to internationally adopted (IA) children, what does the acronym CLM stand for and what does it mean?

CLM stands for Cognitive Language Mastery. It is the language needed for formal academic learning. This includes listening, speaking, reading, and writing about subject area content material including analyzing, synthesizing, judging and evaluating presented information. This level of language learning is essential for a child to succeed in school. CLM typically takes years and years to master, especially because, IA children did not have the same foundation of knowledge and stimulation as bilingual children in their birth countries.

2. ”The pattern of language acquisition in internationally adopted children is often referred to as a second first language acquisition” (Scott et al., 2011). Why? Because the first language (which is typically delayed and limited to begin with due to adverse effects of institutionalization) becomes completely obsolete as English is learned. So they end up learning L2 literally from scratch.

4. IA children may present with “normal” language abilities but still display significant difficulties in this area of functioning cognitive-academic and or social pragmatic communication (acceptable responses).

5.  Finish the following sentence: “Any child with a known history of speech and language delays in the sending country should be considered to have true delays or disorders and should receive speech and language services after adoption.” (Glennen, 2009, p.52)

1. FASD is an umbrella term for the range of effects that can occur due to maternal alcohol consumption during pregnancy which may create physical, cognitive, behavioral, as well as learning/language deficits. It is NOT a clinical diagnosis. Please list at least 3 CURRENT terms under the FASD umbrella (see http://depts.washington.edu/fasdpn/htmls/fasd-fas.htm for details)

2. Name at least 3 characteristics of infants/toddlers with alcohol related deficits

3. Since behavioral problems become more pronounced during the school years, many researchers found that the primary deficit of school aged children with FASD is in the area of (acceptable responses below)

4. Finish the following sentence: adolescents with FASD have significant DIFFICULTY LEARNING FROM Experience

5. Why is early detection of alcohol related deficits important? Because it can lead to

AND NOW THE WINNERS: