A few days ago I was asked by my higher-ups for a second opinion on a consult regarding a psychological evaluation on an 11-year-old boy, which was depicting a certain pattern of deficits without a reasonable justification as to why they were occurring. I had a working hypothesis but needed more evidence to turn it into a viable theory.  So I set out to collect more evidence by interviewing a few ancillary professionals who were providing therapy services to the student.

The first person I interviewed was his OT, whom I asked regarding the quality of his graphomotor skills. She responded: “Oh, they are not so bad”.

I was perplexed to say the least. What does that mean I asked her. She responded back with: “He can write.”

“But I am not asking you whether he can write”, I responded back.  “I am asking you to provide data that will indicate whether his visual perceptual skills, orthographic coding, motor planning and execution, kinesthetic feedback, as well as visual motor coordination,  are on par or below those of his grade level peers.”

Needless to say this student graphomotor abilities were nowhere near those of his peers.  The below “sample” took me approximately 12 minutes to elicit and required numerous prompts from myself as well as self-corrections from the student to produce. This got me thinking of all the parents and professionals who hear litotes such as “It’s not so bad”, or overgeneralized phrases such as: “Her social skills are fine“,  “He is functioning higher than what the testing showed“,”He can read“, etc., on daily basis, instead of being provided with detailed data regarding the student’s present level of functioning in a particular academic area.

This has to stop, right now!

If you are an educational or health professional who has a habit of making such statements – beware! You are not doing yourself any favors by saying it and you can actually get into some pretty hot water if you are ever involved in a legal dispute. These statements are meaningless!

They signify nothing!  Let’s use a commonly heard phrase: “He can read.”  Sounds fairly simple, right?

In other words if the child can decode all the words on the page, but their reading rate is slow and labored, then they cannot read!

If the child is a fast but inaccurate reader and has trouble decoding new words then they’re not a reader either!

If the child reads everything quickly and accurately but comprehends very little then they are also not a reader!

Let us now examine another loaded statement, I’ve heard recently for a fellow SLP: “His skills are higher than your evaluation depicted.” Again, what does that mean? Do you have audio, video, or written documentation to support your assertion?   No professional should ever make that statement without having detailed data to support it. Otherwise, you will be hearing: “SHOW ME THE DATA!“ 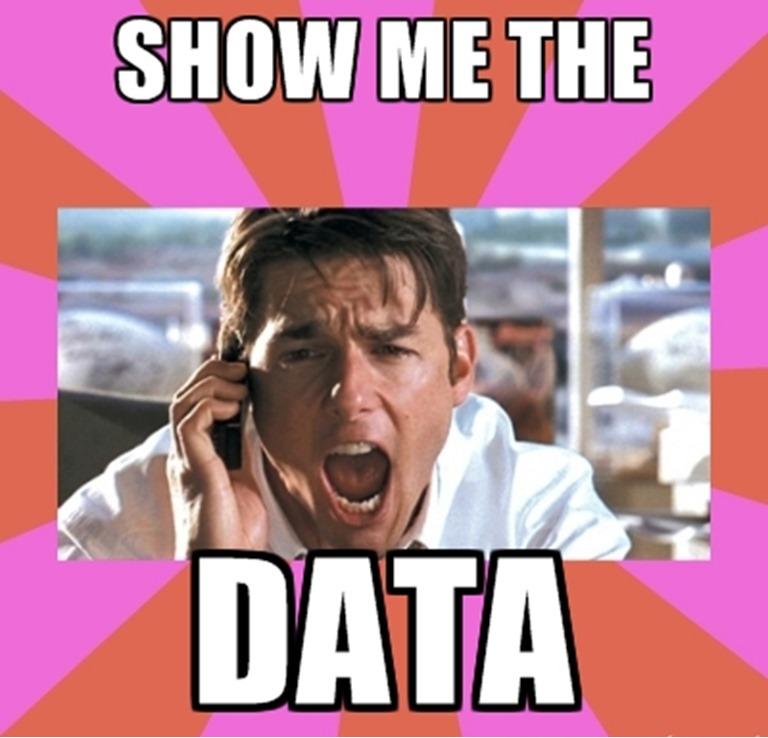 These statements are harmful!

They imply to parents that the child is doing relatively well as compared to peers when nothing could be further from the truth! As a good friend and colleague, Maria Del Duca of Communication Station Blog has stated: [By making these comments] “We begin to accept a range of behavior we believe is acceptable for no other reason than we have made that decision. With this idea of mediocrity we limit our client’s potential by unconsciously lowering the bar.”

You might as well be making comments such as: “Well, it’s as good as it going to get”, indicating that the child’s genetic predestination “imposes limits on what a child might achieve” (Walz Garrett, 2012 pg. 30)

These statements are subjective!

They fail to provide any objective evidence such as type of skills addressed within a subset of abilities, percentage of accuracy achieved, number of trials needed, or number of cues and prompts given to the child in order to achieve the aforementioned accuracy. These statements make you look unprofessional!

I can’t help but laugh when I review progress reports with the following comments:

Social Communication:  Johnny is a pleasant child who much more readily interacted with his peers during the present progress reporting period.

What on earth does that mean?  What were Johnny’s specific social communication goals? Was he supposed to initiate conversations more frequently with peers? Was he supposed to acknowledge in some way that his peers actually exist on the same physical plane? Your guess is as good as mine!

Reading:  Johnny is more willing to read short stories at this time.

Again, what on earth does that mean? What type of text can Johnny now decode? Which consonant digraphs can he consistently recognize in text? Can he differentiate between long and short vowels in CVC and CVCV words such as /bit/ and /bite/? I have no clue because none of that was included in his report.

These statements can cause legal difficulties!

I don’t know about your graduate preparation but I’m pretty sure that most diagnostics professors, repeatedly emphasized to the graduate SLP students the importance of professional record-keeping.  Every professor in my acquaintance has that story – the one where they had to go to court and only their detailed scrupulous record-keeping has kept them from crying and cowering from the unrelenting verbal onslaught of the plaintiff’s educational attorney.

Ironically this is exactly what’s going to happen if you keep making these statements and have no data to support your client’s present level of functioning! Legal disputes between parents of developmentally/language impaired children and districts occur at an alarming rate throughout United States; most often over perceived educational deprivation and lack of access to FAPE (Free and Appropriate Education). I would not envy any educational/health related professional who is caught in the middle of these cases lacking data to support appropriate service provision to the student in question.

So there you have it! These are just a few (of many) reasons why I loathe the phrase: “It’s Not So Bad”.  The bottom line is that this vague and subjective statement does a huge disservice to our students as individuals and to us as qualified and competent professionals.  So the next time it’s on the tip of your tongue: “Just don’t say it!” And if you are on the receiving end of it, just calmly ask the professional making that statement: “Show me the data!”