A few weeks ago in one of my private speech language therapy sessions, I was reviewing the homework  of an 11-year-old student,  part of which involved  synonym and  antonym production describing abstract feelings (e.g., disinterested, furious, etc.). These words were in the client’s lexicon as we had been working on the concept of abstract feelings for a number of weeks. I was feeling pretty confident that the student would do well on this assignment, especially because prior to assigning the homework we had identified the exact emotion which required the generation of antonyms and synonyms. So all was going swimmingly,  until she made the following comment when explaining one of her answers: “I was thinking that this word ____ is not really an appropriate synonym for _________ but I put it anyway because I couldn’t think of any others.”

That gave me a pause because I couldn’t quite believe what I was hearing. So I asked: “I completely understand that you might not have remembered some words but what could you have done to help yourself in this situation?” Without any prompting, the student readily identified a number of strategies including: looking up the words in a thesaurus/dictionary, “Googling” them, or even asking an adult to help her with choosing the best answers from a number of choices.

My follow-up question to her was: “Why didn’t you?” The student just shrugged her shoulders and looked at me in surprise, as though this concept had never occurred to her.

This incident got me thinking regarding the pervasive influence of learned helplessness, and how our students continue to be impacted by it long after they begin receiving the necessary therapies to improve their academic performance. 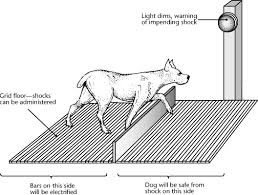 For those of you unfamiliar with this term, here is a brief overview. This phrase was coined by a US based psychologists Martin Seligman and Steven Maier in 1967. In a series of experiments they exposed dogs to electric shocks that they were unable to escape. After a little while the dogs stopped trying to avoid the aversive stimuli because they became conditioned to the fact that they were helpless to change the situation. However, the most fascinating aspect in these series of experiments was the fact that even after the opportunity to escape became clearly available, the animals still failed to take any action and continue to behave as though they were still helpless.

How does this apply to students with learning disabilities?

Many students with language impairments and learning disabilities struggle significantly in school setting due to failing academic performance. The older they get, the more academic demands are placed on them.  This includes but is not limited to the amount of homework they asked to complete, the number of long-term projects they’re expected to write, as well as the number of tests they are expected to study for.

Because they are unable to meet the ever increasing academic demands, their parents begin to actively micromanage their academic life by scheduling the times when the students are expected to perform homework, study for tests, do projects, and much much more. As a result, many of the students do not know how to do any of the above activities/tasks independently because they are conditioned  by their parents/teachers to tell them what to do, how to do it, and how to lead their academic life at any given moment.

The students begin believing they they are helpless  to change even the most basic situations (e.g., take an extra step during the homework assignment and look up a vocabulary word without anyone telling them to do it) and continue to behave in this fashion long after they begin receiving the necessary therapies, coaching, or in school assistance. This is especially true of students whose language/learning disabilities are not identified until later in their school career (e.g., late elementary years, middle school, or even high school).

What are the Symptoms of Learned Helplessness in Children?

The below poster from Dragonfly Forest Blogspot/Forest Alliance Coaching summarizes it quite nicely. 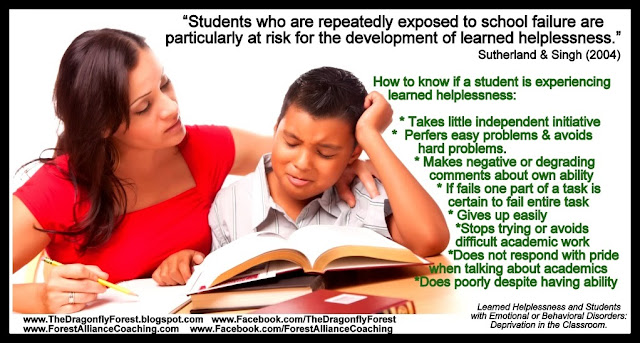 Other symptoms of learned helplessness include:

It is important to note that the above symptoms are most applicable to students with learning disabilities and average cognition.  However, learned helplessness is equally pervasive (if not more so) in students with developmental disabilities (e.g., ASD, genetic syndromes, etc.)

Below are just a few examples of learned helplessness in students with developmental disabilities, which were inadvertently (and/or deliberately) reinforced by the adults in their lives(e.g., family members, educational staff, etc.).

Changing the Patterns of Learned Behavior:

According to available literature, when psychologists had tried to change learned helplessness in animal subjects it took them between 30 – 50 times of physically moving the dogs across the barrier before they proceeded to do so independently. Thus, it stands to reason that the process of rewiring the brain in humans with learned helplessness will be a lengthy one as well.

The first task on the part of adults  is active analysis of all the things  we may be doing  as  parents and educators,  which inadvertently  reinforces learned helplessness in our children/students.   Some  things may surprise you.   For example, I frequently ask the  parents of the students on my caseload what chores and responsibilities  they give their children at home.   In an overwhelming majority of the cases  my clients have  very few chores/responsibilities at home.  This  is especially apparent in families  of language  impaired children  with typically developing siblings. Conversations with parents  frequently reveal that many typically developing siblings (who are sometimes younger than my clients)  have far greater responsibilities  when it comes to chores,  assignment completion,  etc.

Did you know that an average 8-9 year-old is expected to remember to do chores for 15-20 min after school (“prospective memory”), independently, plan school projects (select book, do report, present in school), keep track of changing daily schedule, do homework for 1 hour independently as well as keep track of personal effects when away from home? (Peters, 2013)

While our language impaired children of the same age may not be capable of some of the above responsibilities they are capable of  more then we give them credit for given appropriate level of support (strategies vs. doing things for them).

Where do we begin?

It is important to recognize the potential of the children that we work with without letting their disabilities to color our subjective perceptions of what they can and cannot do. In other words, just because there are significant physical/cognitive handicaps, it does not mean that given appropriate accommodations, therapies, resources, as well as compensatory strategies that our student will not be able to reach their optimal potential.

Changing the ingrained patterns of learned helplessness is no easy feat.  It requires time, perseverance, and patience. But it can be done even in children with significant developmental and learning disabilities.  It is a difficult but much needed process, which is instrumental in helping our students/children attain their optimal potential.

1 thought on “Preventing Learned Helplessness in Students with Language Impairments”