In recent years there has been a substantial rise in awareness pertaining to reading disorders in young school-aged children. Consequently, more and more parents and professionals are asking questions regarding how early can “dyslexia” be diagnosed in children.

In order to adequately answer this question, it is important to understand the trajectory of development of literacy disorders in children.

According to the definition set forth by the International Dyslexia Association: “Dyslexia is a specific learning disability that is neurobiological in origin. It is characterized by difficulties with accurate and/or fluent word recognition and by poor spelling and decoding abilities. These difficulties typically result from a deficit in the phonological component of language that is often unexpected in relation to other cognitive abilities and the provision of effective classroom instruction. Secondary consequences may include problems in reading comprehension and reduced reading experience that can impede growth of vocabulary and background knowledge.”

Thus, despite the significant controversy over the use of the label “dyslexia”, as being ‘unscientific and conceptually problematic’, the above definition affirms the fact that it is undisputedly a linguistically based disability.   While it is true that merely using the term “dyslexia” does not automatically evoke our understanding of what type of specific reading-related deficits the child is experiencing, which prevents him/her from reading effectively, it does alert us right away to the fact that a reading disability exists.

In this post, rather than utilizing the term “dyslexia”, I will use a more broad term “literacy deficits” to refer to children who develop trouble reading, writing, and spelling.

So who exactly are those children? Well, with respect to genetic inheritance, children with immediate and/or extended family members who have in the past received diagnoses such as “dyslexia”, “reading disability”, “learning disability” or who had experienced special education placements during school years are significantly more at risk of developing literacy-based deficits than children with no history of above problems in the family.

Unfortunately, the situation is further complicated by the fact that some children with no recognizable family history of learning disabilities, may be at risk for future literacy deficits if they display a pattern of linguistic difficulties during early development (e.g., delayed developmental milestones).

Below is the approximate hierarchy of language development in young children:

The fact is that if the child experiences any deficits in the foundational language areas such as listening and speaking, s/he will most certainly experience difficulties in more complex areas of language: reading, writing, and spelling.

So now that we know that children with a history of language delay/disorder are at significant risk of having the disorder turn into a learning disability when they’re older, let’s talk about how early can these children be assessed in order to better plan their future literacy-based interventions for optimal functional outcomes.

The first scenario is a more obvious one.  If a child has a documented history of language impairments and is receiving services from a very early age (e.g., early intervention, preschool, etc.) then given what we know about the connection between language disorders and learning disabilities, professionals can begin administering phonological awareness/emergent reading interventions during the early preschool years in order to optimally facilitate the child’s literacy outcomes.

Now our second scenario is not so clear-cut. In our second scenario, the child may have never been identified as having language difficulties during toddlerhood or even early preschool years. However, as the child grows older (e.g., 4-5 years of age) his/her parents may be noticing some subtle difficulties such as difficulty remembering nursery rhymes and songs, trouble remembering the letters of the alphabet, trouble recognizing simple rhyming words, etc.  A such, even without a pertinent family history of literacy disabilities it may be important for a child to undergo an early literacy assessment in order to determine whether intervention is warranted.

Now let’s talk about various assessment options available for preschool children with suspected literacy deficits.  Firstly, if the child has never received a language assessment it is paramount that the child’s language abilities in the areas of listening comprehension, verbal expression, problem-solving and social communication be assessed prior to assessment of literacy  to ensure that the child does not present with any unrecognized/previously undetected deficits in any of the above areas.  This is done in order to ensure optimal intervention outcomes as failure to address gaps/deficits in foundational language areas may significantly impede any potential literacy gains even when the child is provided with optimal literacy based interventions (click HERE to view my post discussing select speech-language tests for preschool children 2-6 years of age).

Now that we’ve covered some basics let us move on to discuss how early can select literacy tests be administered.  Luckily, there are a number of tests pertaining to literacy which can be administered to children as young as 3:6 years of age.

To illustrate: The Auditory Skills Assessment (ASA) can be administered to children 3:6—6:11 years of age. Present controversy over CAPD notwithstanding, it does assess important areas related to early phonological awareness development including nonsense word repetition, phonemic blending, as well as rhyming.

The Comprehensive Test of Phonological Processing-2 (CTOPP-2), starts at 4 years of age and assesses such areas as:

(Assesses the ability to manipulate real and *nonsense words)

For children 4:6 years of age and older the  Emerging Literacy & Language Assessment (ELLA) deserves a mention. It assesses the following literacy related abilities:

Furthermore, starting from 5 years of age the Rapid Automatized Naming and Rapid Alternating Stimulus Test RAN/RAS  tests can be administered in order to assess the child’s word fluency skills.  Decreased word fluency is a significant indicator of reading deficits, which is why this ability is very important to test. 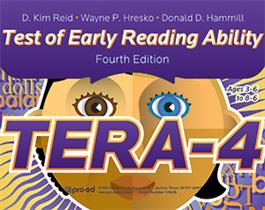 In addition to the above assessments, there are several tests of early reading and writing abilities which are available for younger children with suspected literacy deficitsThe  Test of Early Reading Ability–Fourth Edition (TERA-4) assesses  the emergent reading abilities of children starting from 4-0 years of age. Similarly, the Test of Early Written Language, Third Edition (TEWL-3) assesses  the emergent writing abilities of children also starting from 4:0 years of age.

So there you have it! Now you know that if needed children as young 3:6 years of age can undergo early literacy assessments in order to determine their potential risk of developing literacy deficits when older.

As such, due to the children’s young age there will be a number of instances when testing may reveal “false negative results” (show that there are no deficits when deficits still exist).  Consequently, in such cases, it is important to carefully monitor the child’s school performance in order to perform a literacy reassessment (if needed) when the child is older and his/her difficulties may be more apparent (click HERE to view my 4-part post discussing Components of Comprehensive Dyslexia Testing for further details).

Finally, it is very important to reiterate that children presenting with language and literacy deficits will not outgrow these deficits on their own. While there may be periods of “illusory recovery” when it looks like children with early language disorders have caught up with their peers, such “spurts” are typically followed by a “post-spurt plateau” (Sun & Wallach, 2014). This is because due to the ongoing challenges and an increase in academic demands “many children with early language disorders fail to “outgrow” these difficulties or catch up with their typically developing peers” (Sun & Wallach, 2014).  That is why it is crucial that we identify language and literacy deficits in children at a very early age in order to ensure their optimal educational outcomes.

8 thoughts on “How Early can “Dyslexia” be Diagnosed in Children?”