Those of you who follow my blog know that in my primary job as an SLP working for a psychiatric hospital, I assess and treat language and literacy impaired students with significant emotional and behavioral disturbances. I often do so via the aid of picture books (click HERE for my previous posts on this topic) dealing with a variety of social communication topics.

Two themes that consistently come up in my therapy sessions are taking risks and making mistakes. Many of my students are very afraid of taking risks and are terrified of trying new things whether educationally or socially. To address the issue of taking risks and changing one’s mindset I like using two books by Julia Cook ‘Bubble Gum Brain’ as well as ‘Don’t Be Afraid to Drop’.

‘Bubble Gum Brain’ (video) is a book about two kids: Bubble Gum Brain and Brick Brain, with two drastically different frames of mind. Bubble Gum Brain is a fun fun-loving adventure-taker who makes loads of mistakes, whether falling off a unicycle, striking out at baseball, or playing the harmonica. Even though those things are very difficult, he is not concerned about making mistakes because he realizes that by persevering and not giving up he is learning new things and actually having fun in the process. In contrast, Brick Brain is convinced that “things are just fine the way they are” and trying new things is hard. Brick Brain is hugely reluctant to take any chances in sports, at play, and in life, and is frequently complaining that things are “way too hard”. Then Bubble Gum Brain shows Brick Brain that all he needs to do is to peel off his wrapper, in order to see that he also has a Bubble Gum Brain. After that Brick Brain starts to realize that school and life can be a lot more palatable and even fun even when one is making mistakes.

My favorite part about this book is teaching my students to understand the Power of Yet (“You can’t figure this out …yet”), and explaining to them that with hard work and perseverance they can accomplish just about anything they set their mind to, including the mastery of their language and literacy goals! I teach them to take chances by trying to go just a little bit farther each time and pushing themselves just a tiny bit more in each of their therapy sessions. In addition to asking my students critical thinking questions regarding this text, I at times use a FREE book companion from Technology Tidbits on TPT, to supplement my therapy sessions. It contains a lesson plan overview, a book quiz, a sorting activity, and a few other resources which can wonderfully supplement the session for this book.

Similar to the above,’Don’t be Afraid to Drop’ (video) is a book about a raindrop who is incredibly comfortable living in his cloud with his friends. He is having a very difficult time letting go of the comforts of his cloud as he doesn’t like change or wants to take a risk. However, with his father’s encouragement, the raindrop is eventually persuaded to leave his comfort zone and jump to the ground to see what he is missing. I really like the positive message in this book regarding welcoming change as well as giving back. “You can have it silver you might end up – I promise, you’ll be just fine you will land where you are needed.” By the end of the book, the raindrop realizes that “dropping” had helped him to grow; that change is an ultimately positive thing; and that giving to others (e.g., watering a flower) helps us all grow!

To continue, a considerable number of my students not only both loath (unwilling, reluctant) and loathe (hate) to make mistakes and be perceived as wrong, but will react in some pretty significant ways when those mistakes occur (e.g., climb under the table and refuse to come out, throw a tantrum and refuse to attend therapy sessions, etc.). To teach my students that mistakes are actually beneficial for learning I like to use books such as ‘The Girl Who Never Made Mistakes!’ by Mark Pett and Gary Rubenstein and ‘Your Fantastic, Elastic Brain‘ by  JoAnn Deak. 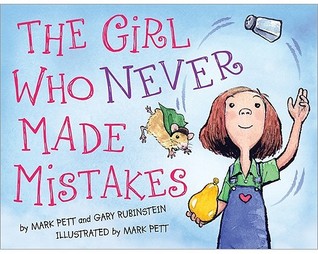 Beatrice Bottomwell is ‘The Girl Who Never Made Mistakes!’ (video) This nine-year-old is perfect in every way, to the point that when she leaves the house she is greeted by her fans, who don’t even know her real name because she’s known to everyone in town as “The Girl Who Never Made Mistakes”.  Beatrice never forgets her math homework, never wears mismatched socks, and has won her school’s talent show by doing her juggling act for three years in a row.  Then one day during cooking class, Beatrice makes an ‘almost mistake’ as she slips on a piece of rhubarb while carrying eggs from the fridge. Even though she manages to catch all the eggs, Beatrice becomes highly preoccupied with her ‘almost mistake’. In fact, she is so perturbed by it that she doesn’t want to ice skate with her friends and can barely eat her food. Later that evening, during the school’s talent show Beatrice’s preoccupation with her ‘almost mistake’ causes her to make a spectacularly huge mistake, which results in her being soaked in water, covered in pepper, with a hamster on her head.  Luckily, rather than getting spectacularly upset, Beatrice comes to a realization that not only do mistakes happen but sometimes they can be pretty hilarious! So rather than crying or getting upset she begins to their end the audience joins in until soon, no can’t quite remember why they were everlasting. This serves as a catalyst for Beatrice not only to have peace of mind but also to mix-and-match her wardrobe choices, make unusual lunches, as well as do plenty of falling during ice-skating. This also precipitates townfolk to finally start calling Beatrice by her real name rather than “The Girl Who Never Made Mistakes”.

Prior to reading this book, I discuss with my students the concept of mistakes, how they feel about when they make mistakes, whether they know people who have never made mistakes, as well as when, do they think it is ok to make mistakes. I spend quite a bit of time on discussing text embedded vocabulary words as well as idiomatic expressions (e.g., ‘stunned’, ‘wobbled’, ‘didn’t miss a beat’, ‘auditorium was packed’, etc.). There is a wealth of amazing FREE materials available to complement this book.  They include but are not limited to: a book companion, Bloom taxonomy leveled questions for grades Pre-K-5th, as well as an educators guide from the book’s two authors. 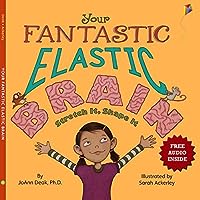 In contrast to all the above books, ‘Your Fantastic, Elastic Brain‘ (video) is a non-fiction book with a focus on describing brain structures and their functions in a very kid-friendly way. The author, who is a psychologist by trade, does a really great job at explaining to children that the brain controls everything we do. She describes the functions of such structures as the cerebrum, cerebellum, hippocampus, amygdala, prefrontal cortex, as well as neurons in very child-friendly terms.  She explains the importance of practicing to get better at doing something, as well as emphasizes that things “get easier when you keep trying”.   I love the stress on the fact that “making mistakes is one of the best ways your brain learns and grows,” and that “if you aren’t willing to risk being wrong, you want to take the chances that S-T-R-E-T-C-H your elastic brain“. In addition to already mentioned science-related words identifying select structures of the brain, the book offers other impressive vocabulary choices such as balance, movement, electrical, signal, cells, neurosculptor, courage, molds, etc.  Beyond understanding why it’s okay to make mistakes, my students feel “really grown-up” because they get the unique opportunity to discuss parts of the brain “even kids in high school don’t know,” as one of my students had put it.

The publishers of the book ‘Little Pickle Press’ have a wonderful 16-page, free lesson plan for educators, intended for children ranging in ages from pre-K through third grade (although it can be easily used with older students with language difficulties as well as intellectual impairment). It is chock-full of educational activities, additional resources, as well as questions which facilitate the growth of meta-cognitive and metalinguistic abilities in elementary aged children. I also use Ned the Neuron Videos to complement book reading as well as book activities. Finally, a handy poster associated with the book can be downloaded HERE.

In conjunction with teaching children that it is perfectly acceptable to make mistakes I also attempt to ensure that they react appropriately when provided with constructive feedback.  For the purpose, I like to utilize a book by Julia Cook, entitled: ‘Thanks for the Feedback, I think‘ (video).  While this book primarily deals with helping children  appropriately respond to compliments, there are still several instances in the book when RJ, the main character receives constructive feedback aimed at helping him to get better at certain things such as playing soccer, keeping a lower voice in class, staying in his seat, as well as dawdling less during assignments. One complimentary activity I like to do in conjunction with the book reading is to have my students watch a variety of YouTube videos, in which individuals are receiving some form of feedback from others. It could be anything from the ‘American Idol’ and ‘Voice’ auditions to ‘Chopped’ judges providing feedback to chefs. After watching the clips I ask the students their impressions on how feedback was received by the participants and how did they figure out whether the participants reacted well/poorly to the provided feedback. 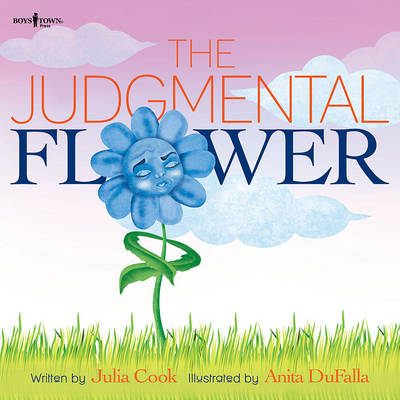 To cap off our discussion on taking risks, making mistakes, and accepting feedback, I also wanted to give an honorary mention to yet another book by the prolific Julia Cook entitled, ‘The Judgmental Flower‘. It teaches children the value of being non-judgemental and being accepting of others’ differences. Because I work with children with significant emotional and behavioral difficulties, this book comes especially handy, when my students are attempting to be quite judgmentally rude to each other. I use this book to teach them to embrace and learn from each other’s differences and emphasize the fact that the world would be very boring is all of us were exactly the same. I also spend some time exploring the notion of “growing in the right direction” as well as on explaining the concept of diversity. I occasionally supplement the book reading with select FREE Activities which can be found HERE and HERE.

Of course, it is important to note that while I use the above books to improve my students’ social communication and executive function abilities, I do so by creating a variety of goals which explicitly target my students’ verbal expression, as well as reading fluency, reading comprehension, spelling, and writing skills. These include answering concrete and abstract questions, defining context embedded vocabulary words, decoding words in books, answering reading comprehension questions given visual support, as well as formulating written sentences based on select words identified in the stories, utilizing appropriate punctuation and capitalization.

So now that you know what type of books I use in my therapy sessions with a focus on taking risks, making mistakes, accepting feedback, as well as being nonjudgmental, I’d love to expand my list by learning about new titles I am not yet aware of from you. Feel free to comments below regarding what other books you are using to address these themes in therapy.