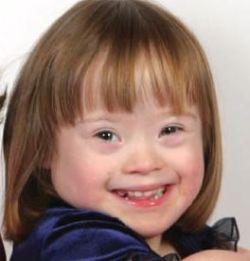 Today’s guest post on genetic syndromes comes from Rachel Nortz, who is contributing a post on the Down Syndrome.

Persons with Down syndrome typically have differences in physical growth and development, facial features, and severe intellectual disabilities. Down syndrome occurs in one out of every 691 births according to the CDC, making it the most commonly occurring genetic condition in the United States. Currently there are more than 400,000 people living with Down syndrome.

Down syndrome occurs evenly in both males and females. Males tend to be sterile while women are capable of having babies. If the mother with Down syndrome chooses to have children, there is a 50% change that her child will also have Down syndrome.

Common physical characteristics of Down syndrome are: low muscle tone, small stature, an upward slant to the eyes and a single deep crease across the center of the palm. Individuals with Down syndrome may also present with a flat appearing face, small head, flat bridge on the nose, small mouth causing the tongue to appear large, extra fold of skin in the inside corner of each eye (epicanthal folds), rounded cheeks, misshapen ears, small wide hands, malformed fifth finger, unusual creases on the soles of the feet, overly-flexible joints, and shorter than normal height.  However it should be stated that each person with Down syndrome may manifest these characteristics to varying degrees or not at all.  Babies with Down syndrome develop at slower rates then normal children. The muscles of babies with Down syndrome ware hypotonic and thus will sit-up, crawl and walk at a much later age than same aged peers.

There are several medical concerns with individuals with Down syndrome. There are common clinical conditions such as congenital heart disease (30-50% occurrence), ear nose and throat disorders, hearing and vision deficits, endocrine disorders, neurological disorders and gastrointestinal disorders (5-7% occurrence).  It is very common for infants to have congenital heart defects. Some common cardiac defects are atrial septal, patent ductus arteriosus, and ventricular septal defects. Infants with Down syndrome also exhibit gastrointestinal malformations that most likely will require surgery. Children with Down syndrome have a high incidence rate of developing upper respiratory problems such as asthma and bronchitis, otitis media, vision loss, dental malformations and seizures. Obstructive sleeping disorders, such as noisy breathing and sleep apnea are common.  It is also common to develop pneumonia, certain kidney disorders, and 20 percent greater chance of developing leukemia.

There are also health issues which adolescents with Down syndrome demonstrate: increased weight gain, skin infections and psychiatric disorders. The increased weight gain can be contributed to reduced physical activity, an increase in food intake and thyroid issues. An increase in weight gain contributes to skin infections that can develop into abscesses. Therefore, proper hygiene is crucial during the adolescent period. Clinical depression is also common during the adolescent stage. Later in life people with Down syndrome are prone to Alzheimer’s disease.

People with Down syndrome typically have some form of delay in cognitive development ranging from mild to moderate severity.

Children with Down syndrome have speech and language skills that are affected by anatomical and physiological differences. Feeding may be a significant difficulty for infants with Down syndrome due to oral-motor deficits. Most babies may need assistance in developing a strong suck and swallow pattern. The size of the nipple, and the hole can be modified for the child. Children with Down syndrome need to have their bodies and their mouths prepared for feeding by increasing their alertness and awareness. Some students may also have hypo-sensitive oral cavities and thus poorly chew food, overstuff mouth, and be messy eaters. Other children may be hyper-sensitive  causing defensiveness when eating, refusal to eat or picky eaters.

Expressive language develops slowly, difficulty with this skill increases with age. Due to the delay in expressive language toddlers with Down syndrome may have delayed babbling and may be more inclined to use gestures of sign language instead of speech. Age of first word production is delayed until an average of 2 years of age. Once the children can use words they may experience difficulty with intelligibility and fluency; this is due to a structure and function problem with their articulators. If the child experiences frustration with expressive language the use of supplemental AAC device may aid in alleviating the stress.

As Down syndrome impacts a child’s physical and mental abilities from birth, early intervention is key. Thus a multidisciplinary approach is a major factor in the success of the child. The team should consist of the child’s parents, physician, occupational therapist for feeding, fine motor skills, self-care, cutting, writing, and play (Bruni, 2006), physical therapist for gross motor skills as these are delayed in children with Down syndrome (Winders, 2001), and a Speech-Language Pathologist for communication skills including sign language, AAC devices, receptive and expressive skills as well as pragmatics.

Children with Down syndrome face many physical, mental and communication challenges in their lifetime, but with the right early interventions and support they can lead a fulfilling and normal life. For more information about Down syndrome or to participate in their charity, The Buddy Walk please visit: http://www.ndss.org/

Buckley S.J. (2000). Speech, language and communication for individuals with Down syndrome-An overview. Down Syndrome Issues and Information.

Buckley, S., Bird, G., & Sacks, B. (1996-2008). Social development for individuals with Down syndrome- An Overview. Down syndrome Education International http://www.down-syndrome.org/information/social/overview

Kumin, L. (1998). Comprehensive Speech and Language Treatment for Infants, Toddlers and Children with Down Syndrome. Down Syndrome: A Promising Future, Together. Wiley-Liss, Inc

Winders, Patricia C. (2001).The Goal and Opportunity of Physical Therapy for Children with Down Syndrome. Down Syndrome Quarterly 6(2), 1-4. – See more at: http://www.ndss.org/Resources/Therapies-Development/Physical-Therapy-Down-Syndrome/#sthash.Lh1hfnVf.dpuf Rachel Nortz completed her undergraduate degree in Speech, Language and Hearing Sciences with an emphasis in Audiology at San Diego State University and graduate degree in Communicative Disorders at San Jose State University. For the past four years Rachel has worked with the preschool and elementary aged population. However she also has experience working in a Traumatic Brain Injury -Cognitive Retraining Program, Skilled Nursing Facility, and after school Sensory Training Approach to Reading and Spelling (Reading S.T.A.R.S).

1 thought on “Spotlight on Syndromes: An SLPs Perspective on Down Syndrome”