As a speech-language pathologist (SLP) working in a psychiatric setting, I routinely address social pragmatic language goals as part of my clinical practice. Finding the right approach to the treatment of social pragmatic language disorders has been challenging to say the least. That is because the efficacy of social communication interventions continues to be quite limited. Studies to date continue to show questionable results and limited carryover, while measurements of improvement are frequently subjective, biased, and subject to a placebo effect, maturation effect, and regression to the mean. However, despite the significant challenges to clinical practice in this area, the usage of videos for treatment purposes shows an emergent promise.

Video modeling (VM), involves the learner being shown a model of targeted behavior, which the learner then has the opportunity to perform immediately or later. There are several types of video modeling (Franzone, & Collet-Klingenberg, 2008):

Studies have demonstrated faster acquisition of social skills and increased generalization when using video modeling in contrast to using modeling completed during a therapy session (Charlop-Christy, Le, & Freeman, 2000). Participants in some of these select studies have shown improvement in recognizing emotions in speech and facial expressions (Corbett, 2003), improved in the areas of compliment‐giving initiations and responses (Apple, Billingsley, & Schwartz,2005) as well as made more frequent social initiations (Nikopoulos & Keenan, 2004; Buggey, 2005).

This past year I have been trying to make my social pragmatic therapeutic interventions more authentic and in line with real-life social experiences, which is why I have increasingly utilized a variety of socially-based videos in my therapy sessions, for the purpose of explicit observational learning. 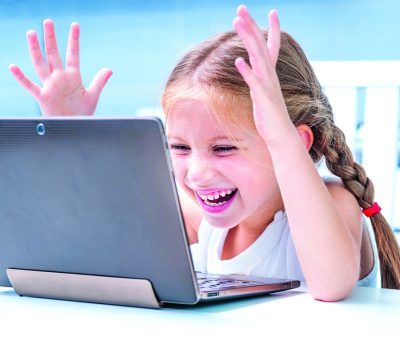 Clinically, I have found increased student participation as well as benefit in sessions that utilized video analysis. During such sessions, my students viewed videos with a variety of ‘social messages’ and then answered a series of verbal reasoning questions pertaining to the videos in order to explore observed social behaviors of actors.  The videos were not restricted to the observations of desired behaviors only. In a number of these videos, the students were presented with certain undesirable behaviors in order to foster a discussion regarding how those behaviors were inappropriate and what could have been done differently to change them.    Past studies have shown that such videos are salient to students and readily engage their attention (Bellini & Akullian, 2007). Moreover, the concept of observational learning has been found to be a highly effective method of learning new information.

The concept of observational learning is based on the Social Learning Theory (Bandura, 1977), which stresses the importance of observing and modeling the behaviors, attitudes, and emotional reactions of others. “Learning would be exceedingly laborious, not to mention hazardous if people had to rely solely on the effects of their own actions to inform them what to do. Fortunately, most human behavior is learned observationally through modeling: from observing others one forms an idea of how new behaviors are performed, and on later occasions, this coded information serves as a guide for action.” (Bandura, 1977, p. 22).

It involves some of the following select principles:

So what materials do I use for this purpose? Well, a variety of materials actually.  Typically, depending on what goals I am targeting in the sessions, I often simply search for the desired videos on YouTube.  At times, I use video snippets from popular TV shows and movies as well as from a variety of both US and internationally produced commercials. I also use free videos from the Semel Institute for Neuroscience and Human Behavior with my older adolescents.

However, for the past number of months, I have been utilizing a variety of videos developed by the Lavi Institute, available via the website Video Learning Squad (FREE 30 Day Trial).  Dr. Adriana Lavi, who is also the developer of the Clinical Assessment of Pragmatics (CAPs) test (reviewed by me last year), has developed this video-based social skills program for students ages 7 and 21 years, as a treatment follow-up to the CAPs. What I like about those videos (there are about 90 of them) is that they were created to target both elementary-aged as well as adolescent students.  While the CAPs begins at 7 years of age, I have been able to use the elementary-aged videos on children as young as 5 ½ years of age with a considerable amount of success.

While the video learning squad website does offer a plethora of useful materials including a hierarchy of treatment sessions, an instructional manual, worksheets, treatment goals, etc., I actually found the videos to be incredibly versatile and created my own protocols to accompany each video, for my own treatment purposes. My protocols were developed with a focus on verbal reasoning, social cognition, Theory of Mind (ToM), etc., based on the available research of identified deficit areas in children with psychiatric impairments and concomitant language deficits, who I serve in both of my work settings (outpatient school located in a psychiatric hospital as well as in private practice).

So what happens in my sessions?

I typically play no more than 2 videos during a 30-minute session. Each video is played 2 times in its entirety prior to being played the third time in short frames. When I replay the video in very short fragments I ask my students targeted questions with a focus on targeting some of the below goals: Here’s an example of questions I developed for an adolescent session based on the Conversational Adaptation Peer Mentored video entitled: “Dolphins” (click HERE to view the entire video on Youtube).

It is important to note that depending on the students’ ages and level of abilities in addition to asking them questions verbally, I also ask them to answer the questions in writing via coherent and cohesive compound and complex sentences.  Below is an example of a 12-year-old student’s responses pertaining to an adolescent video “Birthday Cake” in which “Al” featured in the above video was tricked by several of his friends into cutting a birthday cake before it was appropriate to do so at the party. While I typically do the writing task with my adolescent students, I have also to date done that with a handful of elementary-age students (9-10+ years of age) as well.  Finally, I have also asked some of my more insightful adolescent students to act as peer models and create their own list of questions based on the presented videos.  Here are several questions created by a 15-year-old female in response to watching the same “Birthday Cake” video.

So what are my clinical findings to date?

To date, my data collection has shown that many of my students have increased their accuracy answering verbal reasoning and inferencing questions (e.g., ‘why’, ‘how did this happen’, etc.) pertaining to social videos as compared to when I used socially based worksheets and texts.  Data has also shown that a number of my students have improved their affect and prosody in conversational exchanges after modeling the actors in the videos.  Many of my students have also improved their ability to provide solutions to problems in social scenarios after watching the videos vs. after completing problem-solving worksheets.  In my conversations with students during therapy sessions, I also receive a lot of positive verbal feedback.  My students verbalize that they find the videos “interesting”.  They make requests to watch specific videos and explain why they want to watch them.   Some of them verbalize excitement when coming into therapy sessions because they know that they will be working with these videos. For more details regarding my work with students in therapy using these videos, including to listen to audio discussions of select session excerpts click HERE to access a past presentation entitled: “Video Interventions in Psychiatric Settings: Addressing Social Communication“.

Right now, the research pertaining to video modeling and video analysis to assist individuals with autism as well as psychiatric and social communication impairments is only just emerging. Far more studies are needed in order to determine long-term gains and ultimate benefits for these populations. In the meanwhile, video-based interventions are judged to be a promising treatment methodology for elementary, adolescent, and adult clients with socially-based difficulties and varying levels of cognitive abilities.

What about you? Have you attempted to deliver video interventions to your clients?  What were your impressions and findings? Let myself and our colleagues know by posting your comments below.

For more evidence-based information pertaining to assessment and treatment of social communication difficulties, visit the SLPs for Evidence-Based Practice group on Facebook.

Disclosure: I have received complimentary 1-year access to the videos posted on the  Video Learning Squad website so I can pilot an intervention program in my hospital-based setting.