According to the New York Times Article which summarized the results of Johns Hopkins University study: A  TYPICAL STUDENT WILL LOSE ABOUT ONE  MONTH OF LEARNING OVER THE SUMMER  TIME.

“More troubling is that it disproportionately affects low-income students: they lose two months of reading skills, while their higher-income peers — whose parents can send them to enriching camps, take them on educational vacations and surround them with books during the summer — make slight gains.”  To continue: “the study of students in Baltimore found that about two-thirds of the achievement gap between lower- and higher-income ninth graders could be explained by summer learning loss during the elementary school years.”

But then again it is summer and kids do want to have fun!

So with the recent heatwaves across the country, how about combining fun with learning on those sweltering summer days when lazing at the pool or going outside may not be the best option.

Let’s take a look at the few common and readily available  board games, which can be used to improve various language abilities: including vocabulary knowledge, problem solving, questioning, storytelling as well as other language related skills.

A to Z Jr– a game of early categorizations is recommended for players 5 – 10 years of age, but can be used with older children depending on their knowledge base. The object of the game is to cover all letters on your letter board by calling out words in specific categories before the timer runs out. This game can be used to increase word finding abilities in children with weak language skills as the categories range from simple (e.g., basic concepts) to more complicated (e.,. attributes). This game is great for several players of different age groups, since younger children or children with weaker knowledge and language skills can answer simpler questions and learn the answers to the harder questions as other players get their turn.

Tribond Jr – is another great game which purpose is to determine how 3 seemingly random items are related to one another. Good for older children 7-12 years of age it’s also great for problem solving and reasoning as some of the answers are not so straight forward (e.g., what do the clock, orange and circle have in common? Psst…they are all round)

Password Jr-is a great game to develop the skills of description. In the game you guess passwords based on the one word clues. This game is designed to play with children ages 7 years and older as long as you help the non readers with the cards. It’s great for encouraging children to become both better at describing and at listening. You may want to allow the children to select the word they want to describe in order to boost their confidence in own abilities. Provide visual cheat sheets (listing ways we can describe something such as: what does it do, where does it go, how can we use it etc) to the child as they will be much more likely to provide more complete descriptions of the target words given visual cues.

Blurt – a game for children 10 and up is a game that works on a simple premise. Blurt out as many answers as you can in order to guess what the word is. Blurt provides ready-made definitions that you read off to players so they could start guessing what the word is. Players and teams use squares on the board strategically to advance by competing in various definition challenges that increase language opportunities. 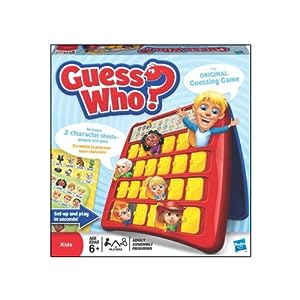 Game that facilitates Story Telling as well as Perspective Taking:   Fib or Not (ages 10+) encourages the players to fool other players by either telling an outlandish true story or a truly believable made up story. For the players who are listening to the story, the objective is to correctly guess if the story teller is fibbing or being truthful. Players advance by fooling the other players or by guessing correctly. 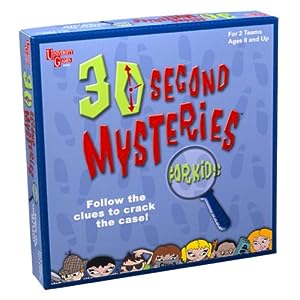 In 30 Second Mysteries kids need to use critical thinking and deductive reasoning in order to solve mysteriously sounding cases of everyday events. Each clue read aloud reveals more about the mystery and the trick is to solve it given the fewest number of clues in order to gain the most points.

In 20 Questions for Kids, a guessing game of people, places, and things. Children need to generate original questions in order to obtain information. Here again, each clue read aloud reveals more about the secret identity and the trick is to solve it given the fewest number of clues.

Now that you know which games to play and why, how about you give it a try.

2 thoughts on “Fun and Educational Summer Board Games: Recommendations for SLPs and Parents”