To date, I have written 3 posts on speech and language assessments of children under 3 years of age. My first post offered suggestions on what information to include in general speech-language assessments for this age group, my second post specifically discussed assessments of toddlers with suspected motor speech disorders and my third post described what information I tend to include in reports for children ~16-18 months of age.

Today, I’d like to offer some suggestions on the assessment of social emotional functioning and pragmatics of children, ages 3 and under.

For starters, below is the information I found compiled by a number of researchers on select social pragmatic milestones for the 0-3 age group: 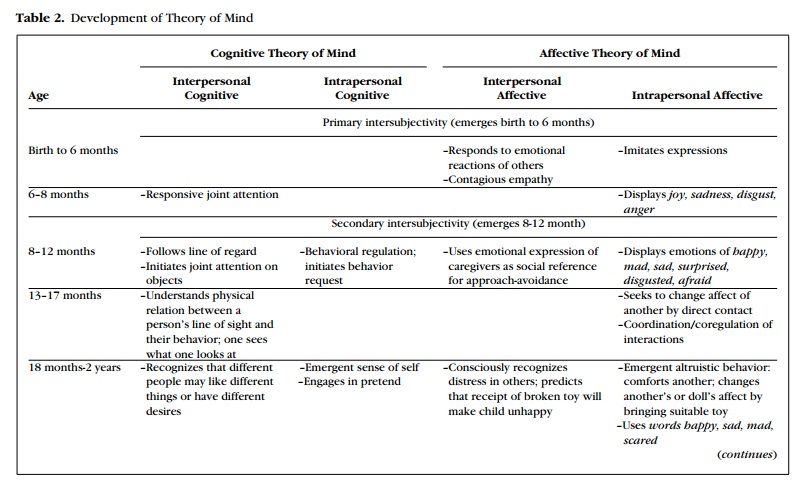 In my social pragmatic assessments of the 0-3 population, in addition, to the child’s adaptive behavior during the assessment, I also describe the child’s joint attention,  social emotional reciprocity, as well as social referencing abilities.

Social emotional reciprocity involves being aware of the emotional and interpersonal cues of others, appropriately interpreting those cues, responding appropriately to what is interpreted as well as being motivated to engage in social interactions with others (LaRocque and Leach,2009).

Social referencing refers to a child’s ability to look at a caregiver’s cues such as facial expressions, body language and tone of voice in an ambiguous situation in order to obtain clarifying information.   (Walden & Ogan, 1988)

Here’s a brief excerpt from an evaluation of a child ~18 months of age:

“RA’s joint attention skills, social emotional reciprocity as well as social referencing were judged to be appropriate for his age.  For example, when Ms. N let in the family dog from the deck into the assessment room, RA immediately noted that the dog wanted to exit the room and go into the hallway.  However, the door leading to the hallway was closed.  RA came up to the closed door and attempted to reach the doorknob.  When RA realized that he cannot reach to the doorknob to let the dog out, he excitedly vocalized to get Ms. N’s attention, and then indicated to her in gestures that the dog wanted to leave the room.”

If I happen to know that a child is highly verbal, I may actually include a narrative assessment, when evaluating toddlers in the 2-3 age group. Now, of course, true narratives do not develop in children until they are bit older. However, it is possible to limitedly assess the narrative abilities of verbal children in this age group. According to Hedberg & Westby (1993) typically developing 2-year-old children are at the Heaps Stage of narrative development characterized by

In contrast, though typically developing children between 2-3 years of age in the Sequences Stage of narrative development still arbitrarily link story elements together without transitions, they can:

To illustrate, below is a narrative sample from a typically developing 2-year-old child based on the Mercer Mayer’s classic wordless picture book: “Frog Where Are You?”

Of course, a play assessment for this age group is a must. Since, in my first post, I offered a play skills excerpt from one of my early intervention assessments and in my third blog post, I included a link to the Revised Westby Play Scale (Westby, 2000), I will now move on to the description of a few formal instruments I find very useful for this age group.

While some criterion-referenced instruments such as the Rossetti, contain sections on Interaction-Attachment and Pragmatics, there are other assessments which I prefer for evaluating social cognition and pragmatic abilities of toddlers.

For toddlers 18+months of age, I like using the Language Use Inventory (LUI) (O’Neill, 2009) which is administered in the form of a parental questionnaire that can be completed in approximately 20 minutes.  Aimed at identifying children with delay/impairment in pragmatic language development it contains 180 questions and divided into 3 parts and 14 subscales including:

Therapists can utilize the Automated Score Calculator, which accompanies the LUI in order to generate several pages write up or summarize the main points of the LUI’s findings in their evaluation reports.

Below is an example of a summary I wrote for one of my past clients, 35 months of age.

AN’s ability to use language was assessed via the administration of the Language Use Inventory (LUI). The LUI is a standardized parental questionnaire for children ages 18-47 months aimed at identifying children with delay/impairment in pragmatic language development. Composed of 3 parts and 14 subscales it focuses on how the child communicates with gestures, words and longer sentences.

On the LUI, AN obtained a raw score of 53 and a percentile rank of <1, indicating profoundly impaired performance in the area of language use. While AN scored in the average range in the area of varied word use, deficits were noted with requesting help, word usage for notice, lack of questions and comments regarding self and others, lack of reciprocal word usage in activities with others, humor relatedness, adapting to conversations to others, as well as difficulties with building longer sentences and stories.

Based on above results AN presents with significant social pragmatic language weaknesses characterized by impaired ability to use language for a variety of language functions (initiate, comment, request, etc), lack of reciprocal word usage in activities with others, humor relatedness, lack of conversational abilities, as well as difficulty with spontaneous sentence and story formulation as is appropriate for a child his age. Therapeutic intervention is strongly recommended to improve AN’s social pragmatic abilities.

In addition to the LUI, I recently discovered the Theory of Mind Inventory-2. The ToMI-2 was developed on a normative sample of children ages 2 – 13 years. For children between 2-3 years of age, it offers a 14 question Toddler Screen (shared here with author’s permission). While due to the recency of my discovery, I have yet to use it on an actual client, I did have fun creating a report with it on a fake client.

First, I filled out the online version of the 14 question Toddler Screen (paper version embedded in the link above for illustration purposes). Typically the parents are asked to place slashes on the form in relevant areas, however, the online version requested that I use numerals to rate skill acquisition, which is what I had done. After I had entered the data, the system generated a relevant report for my imaginary client.  In addition to the demographic section, the report generated the following information (below): I find the information provided to me by the Toddler Screen highly useful for assessment and treatment planning purposes and definitely have plans on using this portion of the TOM-2 Inventory as part of my future toddler evaluations.