Today I am reviewing a great app, which targets verbal reasoning skills in children and adults. Verbal Reasoning by Virtual Speech Center was created to target the following:

Adults with cognitive deficits caused by TBI, stroke, or other brain injuries as well as with Aphasia

It is intended for  individuals ages 12 and up and includes such activities as: END_OF_DOCUMENT_TOKEN_TO_BE_REPLACED

Inattentiveness, hyperactivity, and impulsivity are the most common presenting behavioral problems in at-risk children. This workshop will describe select speech language causes of hyperactivity and inattentiveness in children beyond the ADHD diagnosis, including traumatic brain injury, auditory processing disorders, severe language disorders, as well as social pragmatic language deficits.It will review case examples to illustrate the importance of differential diagnosis. Implications for assessment as well as the need for relevant referrals will be discussed.

Who Should Attend: Anyone interested in discussing behavioral problems in at-risk children.

This article was originally published in December 24, 2012 issue of Advance for Speech Language Pathologists and Audiologists under the title: “Adoption & Pragmatic Problems” (pp 6-9)

While significant variability was found with respect to language gains and outcomes of internationally adopted children, a number of researchers found a correlation between age of adoption and language outcomes, namely, children adopted at younger ages (under 3 years of age) seem to present with better language/academic outcomes in the long-term vs. children adopted at older ages.1,2,3,4

However, children adopted at younger ages, may also present with significant delays in select areas of functioning, many years post-adoption. END_OF_DOCUMENT_TOKEN_TO_BE_REPLACED

I have to admit, I don’t really like flashcards. I especially don’t like it when parents or SLPs use flashcards to drill vocabulary in toddlers and preschoolers, much less school aged children. I feel that it produces very limited learnability and generalization. I am personally a proponent of thematic language learning, since it allows me to take a handful of words/concepts and reinforce them in a number of different ways. The clients still get the benefit of information repetition, much like one would get during a typical flashcard drill.  However, they are also getting much more.  Thematic language learning allows the client to increase word comprehension, make connections to real life scenarios,  develop abstract thinking skills, as well as to transfer and generalize knowledge (Morrow, Pressley, Smith, &  Smith, 1997; Ramey, 1995).

However, even though I dislike flashcards, I still don’t necessarily want to give up using them completely, especially because nowadays many different type of image based language flashcards can be found for free as both printables as well as Iphone/Ipad apps.  Consequently, I decided to pick a free flashcard app and adapt it or rather  “appdapt” it (coined by “The Speech Guy”, Jeremy Legaspi, the “Appdapt Guru”) in a meaningful and functional way for my students.

After looking over and rejecting a number of contenders, without a clear plan of action in mind,  I stumbled upon a free app, ABA Flash Cards – Actions by kindergarten.com, which is designed to target verb labeling in ASD children.   When I saw this app, I immediately knew how I wanted to appdapt it.  I especially liked the fact that the app is made for both Ipad and Iphone. Here’s why.

My primary setting is an out of district day school inside a partial psychiatric hospital.  So in my line of work I  frequently do therapy with students just coming out from  “chill out rooms” and “calm down areas”.  This is definitely not the time when I want to bring or use a lot of materials in the session, since in a moment’s notice the session’s atmosphere can change from calm and productive into volatile and complicated.  I also didn’t  want to use a bulky Ipad in sessions with relatively new children on the caseload, since it usually takes a few sessions of careful observations and interaction to learn what makes them “tick”. Consequently, I was looking for an app which could ideally be downloaded onto not just the Ipad but also the Iphone. I reasoned that in unexpected  situations I could simply put the phone into my pocket, unlike the Ipad, which in crisis situations can easily become a target or a missile.

Given the fact that many children with psychiatric disorders present with significant social pragmatic language deficits (Hyter, 2003; Hyter et al 2001; Cohen et al., 1998; Bryan, 1991; Goldman, 1987 ), which is certainly the case for the children on my caseload, I planned on adapting this app to target my students’ pragmatic language development, social problem solving skills as well as perspective taking abilities.

So here are just a few examples of how I appdapted the cards.  First, I turned off the sound, since the visual images were what I was going after.  Then I separated the cards into several categories and formulated some sample questions and scenarios that I was going to ask/pose to the students:

What do you think the girl is thinking about?

How do you know what she is thinking?

How do you think she is feeling?

How can you tell?

Where do you think she is?

Multiple Interpretations of Actions and Settings:

What do you think the girl is doing?

What else could she be doing?

How does the boy feel about the flower?

Give me a different explanation of how else can he possibly feel?

Who are the boys in the picture? (relationship)

Who else could they be?

What else could he be saying?

How does this child feel?

Why do you think he is crying?

What can you ask him/tell him to make things better?

The girl is laughing because someone did something nice for her?

What do you think they did?

What is the girl doing?

Who do you think is the woman in the picture?

How does she feel about what the girl is doing?

My goal was to help the students how to correctly interpret facial features, body language, and context clues in order to teach them how to appropriately justify their responses. I also wanted to demonstrate to them that many times the situations in which we find ourselves in or the scenes that we are confronted with on daily basis  could be interpreted in multiple ways. Moreover, I wanted to teach how appropriately speak to, console, praise, or compliment others in order to improve their ability to relate to peers. Finally, I wanted to provide them with an opportunity to improve their perspective taking abilities so they could comprehend and verbally demonstrate  that other people could have feelings, beliefs and desires different from theirs.

Since I knew that many of my students had significant difficulties with even such simple tasks as labeling and identifying feelings, I also wanted to make sure that the students got multiple opportunities to describe a variety of emotions that they saw in the images, beyond offering the rudimentary labels of “happy”, “mad”, “sad”, so I took pictures of Emotions Word Bank as well as Emotion Color Wheel courtesy of the Do2Learn website, to store in my phone, in order to provide them with extra support. 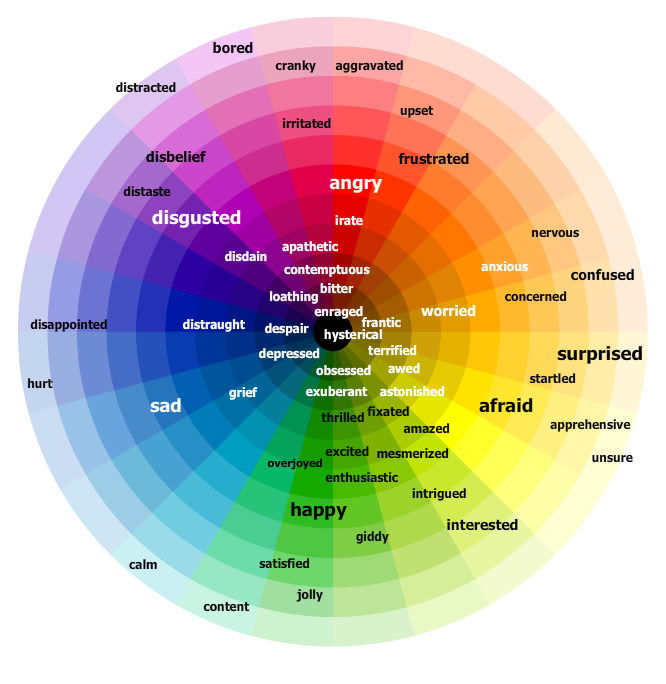 The above allowed me not only to provide them with visual and written illustrations but also to teach them synonyms and antonyms of relevant words.  Finally, per my psychotherapist colleagues request,  I also compiled a list of vocabulary terms reflecting additional internal states besides emotions (happy, mad) and emotional behaviors (laughing, crying, frowning). These included words related to:  Cognition (know, think, remember, guess), Perception (see, hear, watch, feel), and Desire (want, need, wish), (Dodd, 2012) so my students could optimally benefit not just from language related therapy services but also their individual psychotherapy sessions as well.

I’ve only just began trialing the usage of this app with the students but I have to admit, even though its still the early days, so far things have been working pretty well. Looks like there’s hope for flashcards after all! Will be presenting a webinar via speechpathology.com on July 2nd 2012 at 12pm EDT entitled

This course is aimed at increasing the participants’ knowledge regarding the role of SLPs in the treatment of social pragmatic language disorders of school-age children with psychiatric impairments. It will review social pragmatic treatment approaches which can be used for children with psychiatric impairments, explain the functions of common challenging behaviors, as well as list a number of proactive behavioral intervention approaches professionals can implement to decrease challenging behaviors and increase compliance and cooperation in therapy sessions.

Summary: In recent years more and more school based speech-language pathologists have to work with children who present with behavioral deficits in conjunction to speech-language delays/impairments. A significant portion of work with these children in therapy sessions involves successful management of inappropriate behaviors such as excessive inattention, hyperactivity, aggression, opposition/non-compliance and/or apathy, which interferes with successful objective completion and goal attainment. This workshop will explain what type of common challenging behaviors can manifest in children with select communication, psychiatric, and neurological disorders.  It will outline behavior management strategy hierarchy from most to least intrusive methods for students with differing levels of cognitive functioning (high-average IQ to varying levels of MR). It will list positive proactive behavior management strategies to: prevent inappropriate behaviors from occurring, increase students’ session participation as well as improve compliance and cooperation during therapy sessions.

Summary:  The number of children who present with non-spectrum emotional, behavioral, and psychiatric disturbances (oppositional defiant disorder, reactive attachment disorder, mood disorder, etc) has been steadily increasing in recent years. Many of these children attend district schools and due to high incidence of communication issues associated with these conditions, speech language pathologists are frequently included on the team of professionals who treat them.   This workshop is aimed at increasing the participants knowledge regarding aspects of social pragmatic language.  By the end of the workshop participants will be able to list common pediatric psychiatric diagnoses, explain the impact of psychiatric disturbances on language development of children, summarize the role of SLP in assessment of pragmatic language and social cognitive abilities of school-age children, as well as utilize formal and informal assessment instruments to assess pragmatic language and social cognitive abilities of school age children.